They moved to the Olde Towne neighborhood in 1992 to an American Foursquare on Bryden Road. After a major renovation it was featured in Columbus Monthly Homes and on several Olde Towne tour events.

When the historic Dr. Lewis M. Early house (aka: The Garden Manor) came on the market, it was clear that we had found our calling as stewards of this great property.

Allen works as a professional interior designer (ASID), both commercial and residential. Recent projects include Bexley Gateway (www.bexleygateway.com) as well as many private homes in the Columbus area and in several other states.

Al is a licensed Real Estate agent with RE/MAX Metro Plus in German Village and consistently ranks in the Top 1% of RE/MAX agents in the Central & North Ohio Region. www.ColumbusHistoricHomes.com

We are passionate about our work and we do LOVE what we do! Our pleasure is to be engaged in projects and causes that we believe in.

We have been honored to host events at the Manor for the Columbus Symphony, Green Lawn Abby's Great Gatsby Fashion Show, The First Congregational Church Choir's High Tea, The Columbus Gay Men's Chorus, the Columbus Board of Realtor's Historic Neighborhood's Tour luncheon and the "Diner and Diva's" event for Opera Project Columbus.

Allen Baker and Al Waddell purchased the Garden Manor in March of 2003. 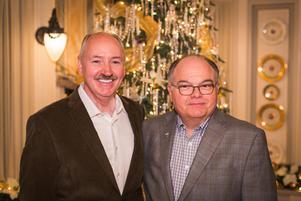