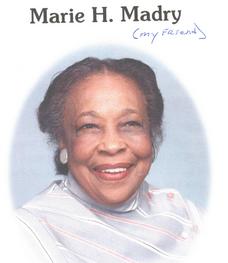 Although the house has not been a private residence for more than 50 years, most of the original interior features had been preserved.

Unlike many of Columbus' Victorian homes, this one had not been divided into apartments or office suites, Baker said. The house served a variety of uses, including a social club, a day-care center and an African-American cultural arts center.

''It was a beautiful place for social events,'' Waddell said.

The dining-room wall panels and woodwork are mahogany, and the ceiling retains its original in-set panels. Above the fireplace is a cast plaster mantel with a large oil painting framed by the plaster moldings.

The grand room boasts cherry wainscoting, elaborate millwork and twin fireplaces with marble mantels imported from France. Above each fireplace is a cherry panel with drapery swags carved into the wood.

Baker and Waddell said they will replace the dozen wall sconces in the room with ones more in tune with the Victorian decor.

The stairway leading to the second floor is graced with bronze posts and spindles and a 10-foot-tall arched stained-glass window at the landing.

The upstairs hallway walls are covered with what appears to be linen material that was set into wet plaster. It is seamless and has not loosened anywhere, he said.

The guesthouse has ornate details of leaded and stained-glass windows and fireplaces and a ceiling decorated with intricate designs molded into the plaster.

The house and office were built between 1892 and 1900 for Lewis M. Early, a physician, inventor and businessman. Early was a pioneer of medical radiation and developed a process of recording X-ray images on paper.

To reassure his patients of the safety of radiation, Early would sit with them during exposures, which could last from 30 to 90 minutes, Waddell said. The repeated exposures eventually led to a long bout with cancer and his death in 1912.

His death merited a front-page story in The Dispatch. Early was eulogized as a martyr to medical science.

From 1940 through 1943, the house was leased and operated as an elegant social club for the thriving black business community. It was the site of wedding receptions, bridge parties and teas, Waddell said.

It also was a bed-and-breakfast for black entertainers, including Ellington, Count Basie and Cab Calloway. Most Columbus hotels were not open to blacks at the time.

Waddell said he has no proof, but he likes to speculate the 1900 Steinway piano in the conservatory may have been graced by Ellington's touch.

A religious organization later used the house as a day-care center and missionary residence. In 1974, the late Marie Madry bought the house and began a long-term restoration and preservation effort of the building. She revived the Garden Manor name for the African-American cultural arts she founded in the building.

Waddell and Baker said they appreciate Madry's preservation efforts.''It is quite a wonderful house,'' Waddell said. ''We feel grateful to live here and we feel a sense of responsibility to be a good stewards.''

The mansion was built by a doctor who pioneered medical X-rays, and among its guests were Duke Ellington and a number of other American jazz greats.Although they have lived in the house less than 10 weeks, Waddell and Baker are ready to share its unique features with the public during the Olde Towne Historic Home, Garden and Renovation Tour on May 18.

The tour will give visitors a ''before'' view of a renovation project, Waddell said. People can return in a year or two for the ''after'' version.
Much of the original interior had been repaired, reconditioned and preserved during 25 years by the previous owner.

Waddell and Baker replaced the furnace and central air conditioner. They returned the 92 sections of stained glass to the ceiling of the 500-square-foot conservatory. The pieces had been stored in a bedroom after they were removed in 1974 during a roof repair. The men also have launched the renovation of the brick building behind the house where the original owner had his medical practice.Baker has designed a formal garden, which is being started in the brick- walled back yard. 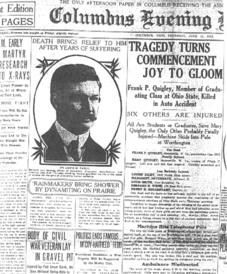 The two visitors were given a cold reception at the Garden Manor, an elegant home with a history of gracious hospitality. But the pair quickly warmed to the place anyway.

Al Waddell and Allen Baker visited the century-old three-story Victorian house at N. 20th and E. Long streets Jan. 17. ''It was 5 degrees, and there was no heat in the house,'' Waddell said.

The cold, unimpressive kitchen they first entered did not enthuse the men, who were looking for a house with potential grandeur. Twice before they had lost out on their attempts to buy old mansions along E. Broad Street in the Olde Towne neighborhood just east of Downtown.''When we walked into the dining room, everybody's jaw dropped to the floor,'' Waddell said. ''The quality of the interior is just amazing.'' 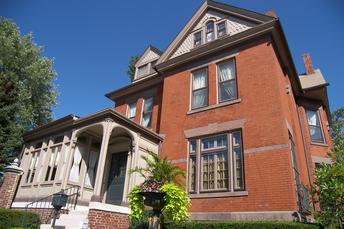 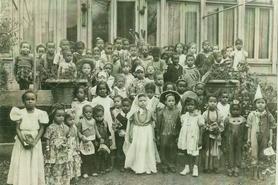 Opulence and exquisite details abounded throughout the house. Each room, with 10-foot ceilings, offered a variety of hand-carved woodwork, wood-paneled walls, French doors, plaster crown moldings, stained-glass windows, marble fireplace mantels and unusual features such as an oil painting permanently framed into the wall above a fireplace.

With the house, Baker and Waddell acquired a significant part of Columbus and neighborhood history.